I decided to speak to a number of people currently managing mental health problems while in work, and I was inundated with responses within minutes of making a public request. 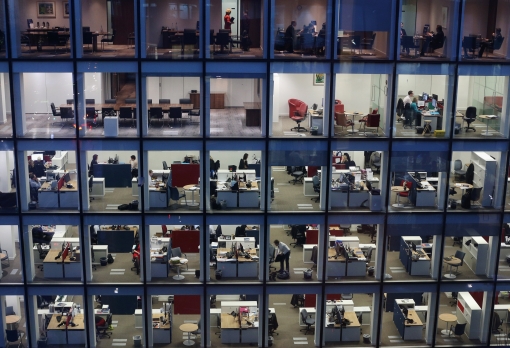 I’ve struggled with my mental health since I was about 13. Poor mental health has cost me the majority of my school and university friends, and a number of academic achievements. It has also had a long-lasting impact on my physical health. As an adult, it makes working a full-time job and fulfilling my professional obligations difficult. I’m not alone in this, as one in four adults will experience mental health difficulties in the UK every year. Working full-time when you’re also trying to deal with a long-term mental health problem often feels like an uphill struggle. It’s like trying to run the same race as my colleagues, but with weights on my wrists and ankles that drag me backwards.

I decided to speak to a number of people currently managing mental health problems while in work, and I was inundated with responses within minutes of making a public request.

Almost everyone I spoke to reported that things considered mildly unpleasant by other colleagues (like staying late or getting up early) can feel like insurmountable hurdles, particularly if you’re taking certain medications. Holly was diagnosed with borderline personality disorder when she was 19. While working as a call handler, she found the strict four week rota, early mornings and varied shift lengths had a negative impact on her mental health. She told me “I struggled with the early morning starts because I had been prescribed Quetiapine. Taking this drug at night would knock me out for twelve hours and I began to find this balance increasingly difficult. I didn’t feel I could open to my employer about my mental health issues.”

Admitting that you’re taking a psychoactive medication that impacts on your ability to function is still not considered the “done thing”. Getting up in the morning was a major problem for me in my first full-time role after university. I was taking Trazodone as a sleeping aid and mood stabiliser, and it would make me feel so groggy and hungover in the mornings, that getting up was a superhuman struggle, every single working day. My inability to be punctual and my “miserable face” (direct quote from previous employer, and pretty offensive to anyone, let alone someone suffering with depression) saw me repeatedly penalised.

In July, comedian and author Ruby Wax was awarded an OBE for services to mental health. She told the Times: “when people say, ‘Should you tell them at work?’ I say: ‘Are you crazy?’ You have to lie. If you have someone who is physically ill, they can’t fire you. They can’t fire you for mental health problems but they’ll say it’s for another reason. Just say you have emphysema”. Coming from someone so recently rewarded for her advocacy work for people with mental illnesses, this is irresponsible advice.

She adds that mental illness “is like the situation used to be with gay rights. Like being in the closet, but mental illness is now the taboo instead”. If this is the case, then surely the way to combat stigma and end the taboo is not to hide mental health problems. The LGBT community don’t continue to make gains in terms of civil rights, positive representations in the media, and widespread public acceptance by staying quiet and hiding away. Of course, Wax is merely responding to a world in which unjust stigma still exists, and advocating that others take the path of least resistance within the workplace. Ruby Wax has, of course, experienced her fair share of prejudice. However, as someone who campaigns for acceptance regarding mental illness, to advise others to hide their conditions from employers is completely counterproductive, and potentially dangerous from a health perspective.

If one in four adults is suffering from mental illness, then you will know someone who is currently experiencing mental health problems. Your boss will know someone. The charity Mind has published research demonstrating that the “culture of fear and silence around mental health” can cost employers dearly, with 1 in 5 people taking days off due to stress, and 1 in 10 leaving positions because of stress. Mind also found that 56 per cent of employers surveyed said they would like to do more to improve staff wellbeing but didn’t t feel they had the right training or guidance to do so. That’s more than half, and it puts a big pin in Wax’s assertion that “employers will find a reason to fire you anyway”.

Tom experienced mental health problems while working for two business magazines, and says that “as someone with little practical experience of the workplace, there was nothing as lonely as being hunched over a laptop in a small office, panicking over how to organise the next hour, never mind hit the deadlines expected. I wouldn’t say my manager was unsympathetic; it was they were incapable of helping. Workplaces, and especially smaller ones working in more specialised fields, simply don’t have the capacity to help people unless they’re fully functioning. It isn’t built into their structure, and however sympathetic people are, as in all fields of life they have their own problems.”

The 2010 Equality Act states that employers have a duty to make reasonable adjustments for people with disabilities, including those who have a mental impairment that impacts long-term (more than 12 months) on their day-to-day activities. From a business perspective, it only makes financial sense for employers to make reasonable adjustments for people with mental health issues.  It’s expensive to have staff take lots of sick days because they’re unhappy and stressed and unable to cope. It’s expensive and time consuming to advertise someone’s job, interview for it, and train and/or acquaint a new person to the role, because a member of staff has resigned due to ill health.

Laura* works in a primary school to support children with learning difficulties. She says “I was actually referred through my work place via occupational health after confiding in one of my close colleagues, (who happened to be my manager), to have counseling. It was done completely privately and I was free to tell everyone or no one, and my timetable was changed to take Wednesdays off for my appointments, running over a six week course. And if I wasn’t feeling up to coming in I could stay at home to cope. As a school, we take mental health super seriously like any other medical condition and I received absolutely no prejudice from the people who knew what I was going through.” Laura was also paid for the time she took off for counseling.

Katie* has bi-polar, and she describes her episodes as “completely debilitating”. She says “I am so lucky right now to have a boss who will give me manageable admin tasks rather than energetic sales, or will allow me different working hours. I part-manage a team who are willing to work around my episodes, l relying on each other for help which means I don’t have to interact as much, and they generally learn a lot during these times”.

However, opening up to colleagues isn’t always a rosy experience, and nor should it be portrayed as such. Katie’s previous role in recruitment involved her work peers making comments like “let’s get her completely drunk and see if she goes manic” and her boss making inappropriate sexual advances. She describes ‘over-sexualisation’ and a lack of boundaries as part of her diagnosis, something that was exploited by her employer. She says that his behaviour “extended to a night out with a client when we went to a bar in the Netherlands and the client wanted to teach me salsa. He became far too intimate and my boss told me to do whatever it took to make the client happy and that it would teach me the importance of client retention in business. He also said that he wouldn’t tell my boyfriend if it won us further business.”

This is a case of serious discrimination on the grounds of sex and disability. It’s unlikely that Katie’s boss would have behaved in the same way with a male subordinate, or with a female employee who wasn’t vulnerable. Katie left her job soon afterwards.

Many people who struggle with mental health issues choose not to disclose their illness due to the stigma they believe will accompany the admission, just as Wax suggest in her ill-advised comments to the Times. Alex* is a fellow journalist and he has kept his mental health problems quiet in the workplace because “I’d hate to be branded as someone with ‘mental health issues’. There’s too much misinformation and too much pity, and I wouldn’t want to risk it going on some sort of mental permanent record in the mind of a superior. People in journalism TALK like none I’ve ever seen, probably because people move around from company to company so much, so it’s difficult to escape a reputation if you have one.”

Anti-discrimination legislation exists to protect those who have both physical and mental illnesses because no one who is sick deserves to be penalized for it. Unfortunately, many people are caught in an ugly catch 22 situation where they’re too embarrassed or scared of being stigmatized to tell their manager or supervisor about their mental health problems, and because no reasonable adjustments have been made, they perform poorly in the workplace. The frustration of not being able to fulfil your potential at work because illness is getting in the way is hugely demoralizing.

Mental health issues don’t exist in a vacuum. They can have a profound impact on how people are able to cope and function at work, but it’s also important to remember that working, and the sense of community, identity and achievement that comes with it, can be crucial to improving and maintaining good mental health. We’ve come a long way in terms of battling the unnecessary stigma attached to mental health, but there’s still a lot of work to be done, attested by the latest figures on suicide in the UK and Ireland.

Mental health can and should be regarded in the same way as physical health by employers and colleagues, and one of the most important ways to ensure this happens is to ask for help when you need it in the workplace. Ruby Wax’s disappointing comments feed into a culture of shame and silence around mental health and work, when we should be striving to open up the conversation and better equip employers to make reasonable adjustments that allow people to fulfil their professional potential. Let’s refuse to be ashamed.

*Names have been changed